You are here: Home / Prius Comparisons

This beauty is more than skin deep. The striking new look of Prius has been engineered to help it easily slip through the wind. Its sleek lines, active grille shutter, aero stabilizing fins and underbody panels all work together to help reduce wind resistance, which in turn helps maximize fuel efficiency. 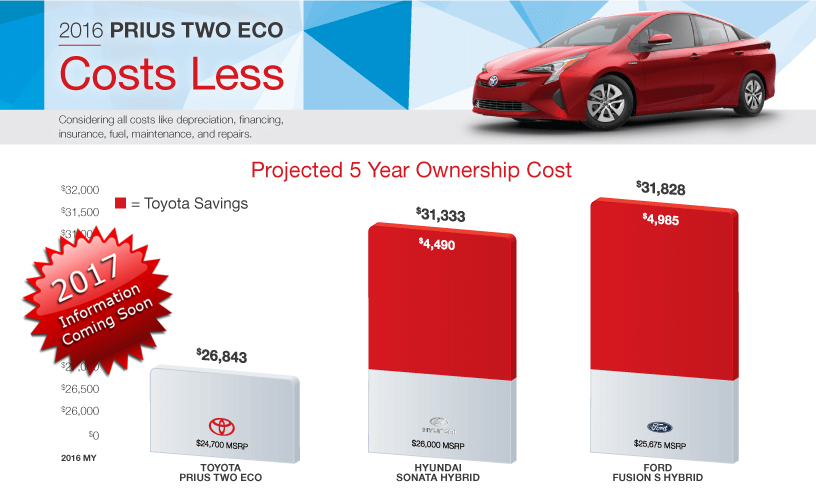 Comparing the Costs of Owning a Prius

The Toyota Prius is advertised as the lowest cost to own hybrid on the market today, between its fuel efficiency, original sticker price, depreciation, and other considerations. If you are looking to purchase a Prius, it helps to know exactly what this claim means, and how the Prius actually stacks up to its competition.

The cost of owning a vehicle is figured out by taking the amount of the vehicle’s depreciation from its purchase price each year and adding in all vehicle related expenses, including taxes, fuel, average costs for repairs, and so forth. Averages used are pulled from research data by several organizations, so different websites will often report slight differences in the actual numbers, even though the ranking of cars is often the same.

The 2016 Prius has an estimated 5 year cost of ownership of just a hair over $26,000 according to Edmunds.com, one of the leading authorities on these kinds of calculations. Looking at their breakdown of costs, over half of the cost of ownership is in depreciation, with maintenance and insurance being the other two largest categories. The good news for Prius owners is that these are both factors that can be controlled through careful planning and purchasing, so chances are this estimated cost of ownership can be reduced a bit in reality.

Looking at the cost comparison between the Prius and other leading vehicles in its class, one finds that it stays considerably ahead of the pack, with some estimates putting its cost at more than $4,000 less than either the Hyundai Sonata or the Ford Fusion hybrids according to some sources. Even more conservative estimates keep it somewhere in the vicinity of $2,000 less expensive over five years.

The Prius was the first really big success in the hybrid car class, and Toyota’s continuous innovations and high standards have helped to keep its performance up even as its costs go down. It’s also the only widely popular vehicle in its class that was designed for its hybrid function from the ground up—not as an adaption to a popular vehicle design. With all that, it’s not surprising that the most popular hybrid brand has managed this, and families looking for an efficient and inexpensive hybrid will find a great fit in the Prius. 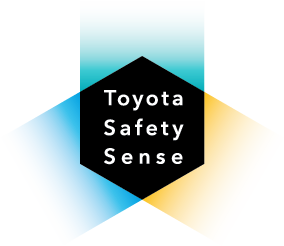 BASED ON MANUFACTURER ESTIMATES MY AND CY 2016 SALES.

90% OF ALL PRIUS MODELS SOLD OVER THE LAST 10 YEARS ARE STILL ON THE ROAD TODAY.

BASED ON IHS MARKIT VEHICLES IN OPERATION AS OF JULY 2016 FOR MODEL YEARS 2007-2017 VS. TOTAL NEW REGISTRATIONS FOR THOSE VEHICLES.

THE 2017 TOYOTA PRIUS V IS AN IIHS TSP+ WHEN EQUIPPED WITH THE OPTIONAL PRE-COLLISION SYSTEM AND LED HEADLIGHTS.