You are here: Home / Sienna Comparisons

Everyone is a VIP inside Sienna, especially the person driving. A new wraparound dashboard design moves all controls closer to the driver, so it’s easier to keep you comfortable and entertained. 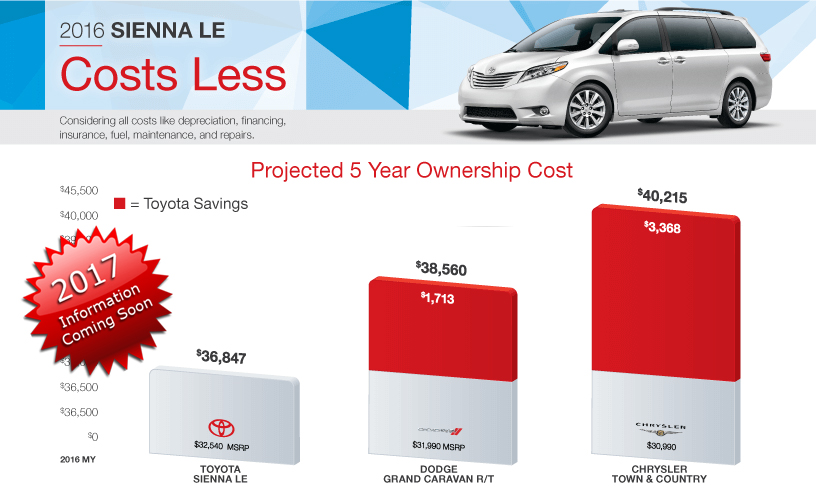 The Toyota Sienna has been a top-performing minivan for a few years, with options and features that rival its two largest competitors and now, as of 2016, the lowest five year cost of ownership of any comparable minivan. Looking into how and why Toyota’s flagship family minivan has managed to achieve this is a matter of looking into how the costs of ownership are figured.

Depreciation is the largest factor in practically any cost of ownership projection, and the Sienna does better than most vehicles, with less than 1/3 of the total going to depreciation. That means you can count on it to hold its value, and it helps offset the higher MSRP by keeping its value in the event of resale.

Fuel is the other main driving factor when it comes to costs for maintaining a newer vehicle, and the Sienna does well there, providing an efficiency that makes it easy on the wallet while it’s still spacious enough for your whole family.

The Sienna has a higher MSRP than both of its main competitors, the Dodge Caravan and the Chrysler Town & Country, but it has a lower 5 year cost of operation than either one, partially because of its efficiency and comparatively low maintenance and repair estimates, and partly because of its low depreciation.

The Sienna’s ability to hold its value comes in part from customers’ recognition that it is a rugged, comfortable, and fun minivan that works for the whole family and holds up under use. That makes it a particularly sound investment as a five-year car, one that you buy new and then plan to turn around and sell for your next down payment. At the same time, though, those same qualities make it easy to want to discount the resale aspect entirely and just hold on to the Sienna for life.

2017 SIENNA IS THE ONLY VEHICLE IN ITS CLASS TO HAVE AVAILABLE ALL-WHEEL DRIVE.

The IntelliChoice Best Overall Value of the Year awards identify the vehicles with the lowest total cost to own and operate over the first five years of ownership. Selected from nearly 2,300 domestic and import 2017 model-year vehicles, the Best Overall Value of the Year (BOVY) awards recognize the best car values by class. IntelliChoice’s BOVY awards represent the oldest and most recognized automotive data analysis focused solely on identifying vehicles that will cost significantly less to own than other vehicles in their respective class.